The School Shootings dominate the headlines today and probably for quite some time into the future. There is much to say and too much said already that should not have been said at all. I thought I would turn away from the spin doctors, hate mongers and the various news programs and escape into something a to distract myself from the whole horrible episode. 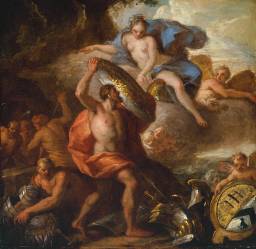 I went to Swenglish Rantings Weekend Radio 041307 and played the mp3 file of the lecture by Dr. Phillip C. Bobbitt broadcast by the Pritzker Library last week on Thursday, April 12th. Dr. Bobbitt begins with a brief humorous introduction and a poem by Czeslaw Milosz called “Preparation”

Still one more year of preparation.
Tomorrow at the latest Iâ€™ll start working on a great book
In which my century will appear as it really was.
The sun will rise over the righteous and the wicked.
Springs and autumns will unerringly return,
In a wet thicket a thrush will build his nest lined with clay
And foxes will learn their foxy natures.

And that will be the subject, with addenda. Thus: armies
Running across frozen plains, shouting a curse
In a many-voiced chorus; the cannon of a tank
Growing immense at the corner of a street; the ride at dusk
Into a camp with watchtowers and barbed wire.

No, it wonâ€™t happen tomorrow. In five or ten years.
I still think too much about the mothers
And ask what is man born of woman.
He curls himself up and protects his head
While he is kicked by heavy boots; on fire and running,
He burns with bright flame; a bulldozer sweeps him into a clay pit.
Her child. Embracing a teddy bear. Conceived in ecstasy.

I havenâ€™t learned yet to speak as I should, calmly.

Dr. Bobbitt then takes us through some of the topics from his critically acclaimed book â€œThe Shield of Achilles: war peace and the course of historyâ€.

He quotes several scholars and writers as he lays out his thesis. â€œAfter bosnia, After September eleventh we can expect a clash of civilizationsâ€. Elablorating he goes into the former states of Yugoslavia he discusses three plates coming together, Orthodox, Roman Catholic and Muslim. The clashes between India and Pakistan, or the Sunni & Shi’a conflict in the middle east.

He then goes into an explanation of the Modern State, and the Nation States. He begins with the fall of Constanpenople and the forging of the famous brass cannons. I can remember in my history reading the engineers of these cannons and how they offered the cannon to various rulers of the time and finally found the Turks who saw the wisdom and payed for the building of the Cannon. Latter on after the fall of Constanpenople, cannon of similar design were latter brought to Italy and changed the course of history there.

Bobbitt takes us to the American Revolution and the tacktics of warfare then to the tactics used in the Conquests of Napoleon.

Dr. Bobbitt makes interesting constitutional points with reference to Nation Statehood. He places the United States Nationhood not at the signing of the declaration of independence or the ratification of the US Constitution but instead with the Presidency of Abraham Lincoln. He explains how there is a difference between a Nation and a State.

There is a brief explaination of what he terms the five challenges of the Nation State:

The Globalization of trade and finance

The Development of Transnational Threats

The Emergence of Weapons of Mass Destruction

Dr. Bobbitt brings in the concept of Market States. Groups that are not connected to the State but still coheisive and formatable.

His new book “Terror and Concent” he says will cause him to be cast out of most social circles, as he lays out how wars will be fought in the future. Classic warfare is over, wars with a beginning and an end are over.

The lecture was chok full of history Information and some poetry. He concluded with this poem:

Perhaps when all the tears have been shed
the earth will be more fertile.
Perhaps when we sing praises to the sun
The sun will praise us in return
Perhaps these heavy burdens
will strengthen our philosophy
Perhaps when we weep for those in misery
we must be silent about miseries of our own

For me this lecture was a good break from the 24/7 news of the School Shootings in America.

Take a break, sit back and spend the 40 minutes to listen to this Professor talk about issues that need our thought and attention.

Another poem that Dr. Bobbet has read in similar lectures is this poem by W.H. Auden that depicts a world at war. Audenâ€™s poem ends with the goddess Thetis, who had commissioned the new shield for her warrior son. I am putting the whole poem here although I am only aware of Dr. Bobbitt reciting the ending in past lectures.

She looked over his shoulder
For vines and olive trees,
Marble well-governed cities
And ships upon untamed seas,
But there on the shining metal
His hands had put instead
An artificial wilderness
And a sky like lead.

A plain without a feature, bare and brown,
No blade of grass, no sign of neighborhood,
Nothing to eat and nowhere to sit down,
Yet, congregated on its blankness, stood
An unintelligible multitude,
A million eyes, a million boots in line,
Without expression, waiting for a sign.

Out of the air a voice without a face
Proved by statistics that some cause was just
In tones as dry and level as the place:
No one was cheered and nothing was discussed;
Column by column in a cloud of dust
They marched away enduring a belief
Whose logic brought them, somewhere else, to grief.

She looked over his shoulder
For ritual pieties,
White flower-garlanded heifers,
Libation and sacrifice,
But there on the shining metal
Where the altar should have been,
She saw by his flickering forge-light
Quite another scene.

Barbed wire enclosed an arbitrary spot
Where bored officials lounged (one cracked a joke)
And sentries sweated for the day was hot:
A crowd of ordinary decent folk
Watched from without and neither moved nor spoke
As three pale figures were led forth and bound
To three posts driven upright in the ground.

The mass and majesty of this world, all
That carries weight and always weighs the same
Lay in the hands of others; they were small
And could not hope for help and no help came:
What their foes like to do was done, their shame
Was all the worst could wish; they lost their pride
And died as men before their bodies died.

She looked over his shoulder
For athletes at their games,
Men and women in a dance
Moving their sweet limbs
Quick, quick, to music,
But there on the shining shield
His hands had set no dancing-floor
But a weed-choked field.

A ragged urchin, aimless and alone,
Loitered about that vacancy; a bird
Flew up to safety from his well-aimed stone:
That girls are raped, that two boys knife a third,
Were axioms to him, whoâ€™d never heard
Of any world where promises were kept,
Or one could weep because another wept.

The thin-lipped armorer,
Hephaestos, hobbled away,
Thetis of the shining breasts
Cried out in dismay
At what the god had wrought
To please her son, the strong
Iron-hearted man-slaying Achilles
Who would not live long.