These are very good. The place that did the video has a whole lot more…

These will be incorporated into so many posts.

A four-year-old girl has been attacked and bitten by a beaver near Ã–stersund in northern Sweden. The incident took place after the girl and her father went out for a walk near their home in the village of Ã…s. They spotted the beaver at the side of the road and the girl decided it would be fun to pet the animal, newspaper Ã–stersunds-Posten reports. But the beaver had other ideas and quickly lunged at the girl. The attack was filmed by the girl’s father, Marcus Handler, who was standing ten metres away. “What I was seeing through the camera seemed unreal. I just screamed ‘no, no’ and rushed towards Matilda.

Then the beaver started attacking me instead but I managed to jump out of the way and grab hold of Matilda,” he told the Ã–stersunds-Posten newspaper. With his daughter bleeding profusely from one of her wrists and one of her thighs, Handler flagged down a passing car and had the girl taken to a nearby clinic for treatment. A week has now passed since Matilda’s unexpectedly violent brush with the animal kingdom and the girl is eager to speak about her trauma. “It jumped on me and started biting. I was bleeding a lot. It was silly,” she said. Asked what she would do if she ever bumped into the beaver again, Matilda said she would “sword it with a sword”. Maano Aunaduu, a local zoologist, believes the animal felt threatened by the four-year-old. “It did exactly what a dog would have done in a tight situation,” he said, adding that it was never advisable to pet a wild animal. He did however concede that Matilda’s experience was rare. “It’s the first time I’ve ever heard of anyone being bitten by a beaver,” he said.

The people of Denmark have been reacting differently after last year’s coordinated Mohammed riots, protests and boycotts over the now infamous Mohammed Cartoons.

What appears to be a coordinated protest in Denmark to symbolically burn Mohammed in effigy began this weekend as part of midsummer celebrations by groups of Danes. The culmination has been the production of the video that was posted on YouTube. The Danish midsummer burning of Mohammed protest has either gone un-noticed by Swedish and Danish Newspapers or has purposely been suppressed.

The protesters begin their YouTube Video with three pages of text. They are in Danish. Below you will find the Danish text and the English Translation of that text.

The Danish protesters use the word “muhammedaner” which some people have stated is not the Politically Correct term for a person of the Islamic faith. On Danish sites we have read the argument that Christians are called Christians because they follow Christ. In “Det Danske Fredsakademi ordbog” The Danish Peace Academy Dictionary the word is defined as:

The word being a legitimate historical word or not the Danish Protest was clearly not intended to be mistaken for something resembling Political Correctness.We see similar protests throughout the Islamic world on a daily basis and worse. While two wrongs do not make a right, fair is fair. We will have to see if free speech exists in Denmark or Europe for that matter.

Today the Swedish newspapers GÃ–TEBORGS-POSTEN, EXPRESSEN, ResumÃ© and the electronic newspaper TheLocal reported that a Stockholm man living in the northern Swedish town of Ã–stersund was offended by a local Nordic Airline advertisement that referred to Stockholm as being “FjolltrÃ¤sk” which means something like “Mire of Queens”.

The Stockholm man took his complaint to the Red Cross which handles complaints of discrimination in that area of the country and forwarded the complaint to Swedish Regulators.

It is not hard to see how people associate Stockholm with “FjolltrÃ¤sk” (A mire of Queens). Television advertisements are constantly projecting this humorous effeminate image of men from Stockholm. PressbyrÃ¥n, which is a chain of kiosks that sell newspapers, hot dogs, candy, cigarettes, soda etc., has a long running commercial that is repeated over and over, showing a middle aged man with a very styled hairdo, fashionable clothes and glasses, a silk scarf around his neck and a little purse with a strap around his one wrist, coming into the kiosk and discovering the “one cup of coffee and a cinnamon bun” promotion, getting all excited in a feminine kind of way, exclaiming “oh my GOD, that’s SO retro” in a distinct Stockholm accent. And there is also the Synsam optician advertisement, Synsam has a sales drive where you buy two pairs of glasses and pay for one. We see a man in an elevator, surrounded by other people that all are giggling and looking at him. He discovers that he is wearing women’s glasses, and reaches for his briefcase, opens it, rummages through women’s high heel shoes and feather boas and gets out a pair of men’s glasses that he puts on instead. The speaker voice has a distinct Stockholm accent.

What would happen if our favorite horror film characters Freddie Kruger, Michael Myers (Halloween) and Jason (Friday 13th) took a break from their hectic killing spree’s, put down their weapons of murder, had a few beers and picked up musical instruments?

Lordi are the new crazies on the block, looking as if they have escaped from the cast of an Evil Dead movie and sounding like a cross between KISS and Rob Zombie – this is the most fun you can have without incurring a lengthy sentence in prison. Lordi hail from Finland, Lapland Finland in fact, The home of Father Christmas who is rumored to have moved since Lordi set up shop!

Sweden on the other hand via Stockholm is sending the Gender Bending Glam Rock Band “The Ark” to the Eurovision Song Contest this weekend in Helsinki, Finland.

Sweden is all pumped up for “The Ark” to win the Eurovision contest this year. They are listed by bookmakers across Europe as one of the favorites.

We living in Sweden have been unable to escape “The Ark”. The Ark has been running in a short commercial featuring their popular song “The Worrying Kind” for the Swedish Clothing store MQ, “Man & Quinny” which translated by many of us means Man & Queen clothes store.

The commercial is shown below:

So why are people from Stockholm offended by the stereotype?

Well… Probably because there are many people in Stockholm who do not fit the mold and image that Stockholm has delicately sculpted for itself.

Hey, we might not particularly like the candy music of “The Ark” but be darn sure we all hope the ARK WINS The EUROVISION SONG CONTEST this year! Heja Sverige!!!

There is another show The Monkey Princess and I really enjoy here in Sweden that is out of Stockholm. It is the “Rocky och Drago” with Peter Siepen och Tilde FrÃ¶ling . 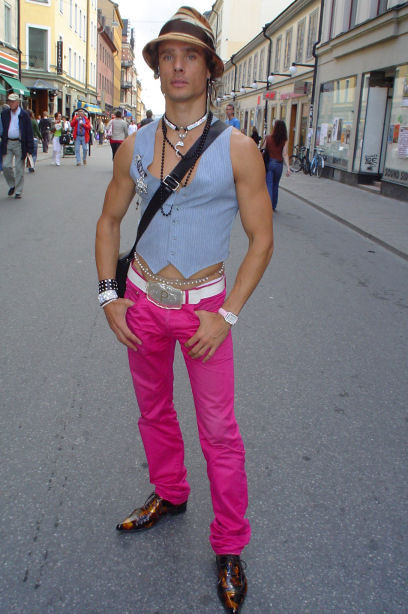 Peter’s style I would describe as an exaggerated caricature of the “FjolltrÃ¤sk” ‘Mire of Queens’ Stockholm stereotype.

In this video clip, Rocky and Drago are in Texas and visits TXRD for some rollerderby action – notice how compared to the “roller girls” Peter is VERY toned down in his choice of clothing!

The Red Cross says “The word FjolltrÃ¤sk is used in a very insulting way here in JÃ¤mtland. There’s always a negative focus on Stockholm in Norrland and here is a big company using this negative term,” the Red Cross’s Anna Ebenmark told one of the Swedish Newspapers. ‘Fjolla’ (‘queen’) also sounds negative, but this case isn’t so much about homophobia as it is about negative attitudes towards Stockholm,” she said. Sara Gustafsson, director of marketing for Fly Nordic, told news agency TT that the advert was not intended to harm anyone. I come from northern Sweden myself, and for me ‘FjolltrÃ¤sk’ is a light-hearted term for Stockholm. We wanted people to laugh at the advert,” she said.

EXPRESSEN, A Stockholm newspaper distributed as an evening paper all over Sweden had a Poll Question. Click For EXPRESSEN “FjolltrÃ¤sk” Reader PollBelow are the first few responses listed at the time we pulled them and translated them into English:

Should Stockholm be allowed to be referred to as “FjolltrÃ¤sk”?

The people that call themselves “Stockholmers” are mostly just “farmers” that have been living in the city for a few months and “talk” with a Stockholm accent, in other words sissies.

Why not. The people in FjolltrÃ¤sk usually claim that other people aren’t as smart as they are. So then it would be absolutely OK to call the 08 area code region FjolltrÃ¤sk.

FjolltrÃ¤sk, not that one too! Says a trucker from Stockholm. When I meet colleagues they say that people in the south calls us 99’s. 99’s? Yes, because we aren’t exactly 100 %. Not sure FjolltrÃ¤sk might be good anyways!

Haha, FjolltrÃ¤sk IS a suitable name for that city on the backside of Sweden! Haha!

Of course you can call Stockholm “FjolltrÃ¤sk”. What are they going to do about it? Hit us with their purses, or what…?